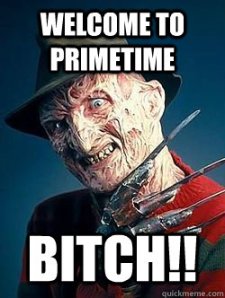 While I browse through the channel, I suddenly stopped on AMC network, as it was showing a horror movie that brought back childhood memories. In case you live under a rock, AMC is cable and satellite channel that brought us TV series such as the high school teacher turned badass in Breaking Bad, the alluring lifestyle of Mad Men and the much-celebrated zombie/drama series Walking Dead,

The harvest season is upon us, and what more way do we celebrate it? By dressing up ourselves into our favored character or most feared childhood boogeyman that we deemed horrifying,  or maybe, simply dressing up to the most absurdly and wackiest outfit that the media has thrown us lately, such as Miley Cryus during the MTV awards.  Whichever it is, something in the past always reminds us of Halloween, and one of those things is Freddy Kreuger himself.

Ask anyone…ask your uncle, your cousin, your co-worker, your classmate or maybe even your neighbor.  The name became a household name, just as Mr. Clean or Aunt Jemima. Getting back on track, when I saw this movie playing on AMC, it reminded me of being young, being scared and being helpless. I remember my dad renting this movie and playing it on a VHS, as he sings the song “one, two…Freddy’s coming for you.” It terrified me. However, if you watched the movie, you can tell that the characters in this film were actually fighting back to the antagonist, The girl who mediated herself into another one’s dream, or the guy who taught that he was invincible because he had a wrong inkling of being the son of Freddy, and who can forget, Freddy Kreuger’s daughter, who kicked her nightmare, serial dad, by the end of the movie.

I sat and watched the entire film, even though it’s unbearable because of the effects and presentation of the movie. However, it reminded me of one crucial thing in my life. My dad was in his early 30’s when he showed me this movie, I remember my mom screaming, “why are you showing this to your kids!” When I was young, my whole notion was that my dad is just trying to be cool because he’s in his early 30’s and being hip to his spawns.  But as a guy having a degree in business and jurist degree, I saw the standpoint or his point of view. He loved the movie, no matter how cheesy or absurd it is, because the movie has a point, and that point is you fight your nightmares. Since nightmares are just a phase, once you get through it, you wake up and telling yourself and your friends, “I have this nightmare…”

You survived that nightmare, and on to the next one!